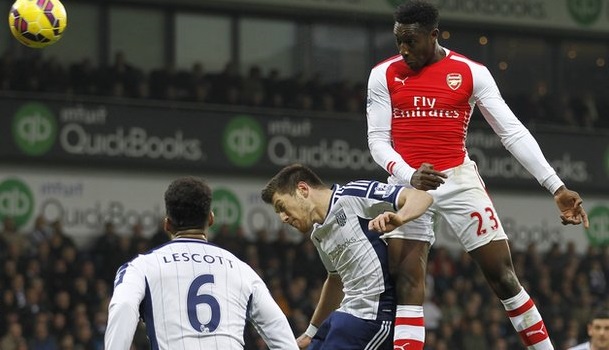 Arsenal defeated West Brom 1-0 away from home on Saturday to ease the immediate pressure on manager Arsene Wenger, although the slender scrappy victory will do little to stem calls for the Frenchman to step away.

It is a case of one game at a time as the Gunners get back to form, but despite the gathering storm around Wenger’s position at the club, Arsenal are sixth in the league, just two points off Manchester United in fourth. In other words, the clubs’ form is not as bad as many make out and a place in the Champions League places next season is as likely as any other year.

That is not enough for some fans anymore, but the victory over West Brom was another three points on the way to at least achieving that minimum requirement. Danny Welbeck continued his promising start to life with the Gunners with a 60th minute strike that handed the North London club the vital win.

Welbeck made way for Olivier Giroud upfront, with the former Manchester United man operating wide right, a position he disliked at Old Trafford. Nevertheless, the England international was on hand to capitalize on Santi Cazorla’s good work that saw the Spaniard play a smart cross into the area. Welbeck met the ball with his head and sent it past Ben Foster in the Baggies net.

Despite West Brom providing a dogged defensive display, the Midlands club spent much of the game struggling as an attacking force. The hosts couldn’t find a way to hurt Arsenal, with the Gunners offering twice as many shots through the game. West Brom woke up in the final fifteen minutes and offered a sterner test of Arsenal’s back four. Arsene Wenger will no doubt be pleased that the unit kept a clean sheet.

He will also be pleased that on a day when Arsenal fans held a banner reading – ‘Arsene – thanks for the memories, but it’s time to say goodbye’ – his team won the game.