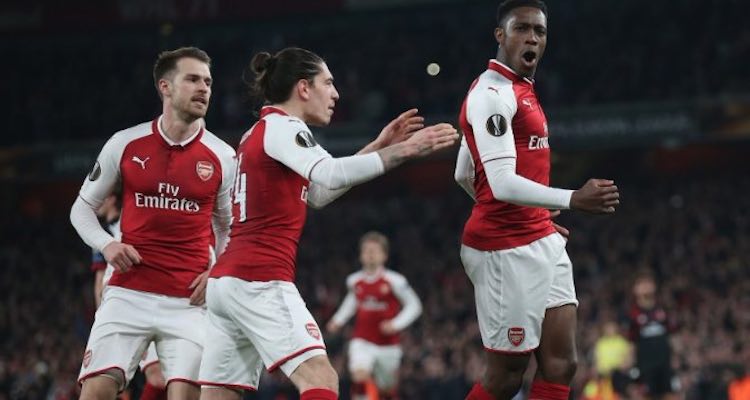 Arsenal went through to the quarter-finals of the Europa League with a 3-1 win over AC Milan at the Emirates last night. Two goals from Danny Welbeck and a Granit Xhaka strike added to the 2-0 win in Italy last week to give us a hugely convincing 5-1 victory on aggregate. For a team that’s been well and truly in the doldrums in recent times, that’s a pretty impressive outcome. Not one I was necessarily expecting either, but during a difficult period where criticism has been rife – and not undeserved – I think it’s right to credit the players and the manager for what we’ve done over the two games. I mean, the takeaway from these 180 minutes of football for me, at least, is that Arsenal scored five times against a team that had been on a thirteen game unbeaten run and had conceded just four goals in total in that period. They came into this tie in better form and for Arsenal to win so convincingly was what I would seek to build my story around if I were writing about it. That doesn’t seem to be the case for others though, as the penalty awarded to us yesterday has dominated the headlines and back pages. I’m not one for media conspiracies or anything, but I guess ‘Arsenal win comfortably’ isn’t quite as catchy as ‘Danny Welbeck’s shameful dive overshadows Arsenal win and embarrasses English football – even Gunners fans were appalled’. No, I did not make that up. That was the headline to John Cross’s piece in the Mirror, and at this point we should point out that sub-editors, not journalists, write the headlines, but inside the piece John said:

The game will be remembered for Danny Welbeck’s blatant dive to win a penalty. It was a moment that should embarrass English football and maybe even shame a few others to stop diving once they see the reaction as even Arsenal fans were left appalled. And, ultimately, it was the moment that decided the whole tie because Welbeck dived just at a time when AC Milan were threatening to stage a fightback.

I engaged with John on Twitter about this. Not to defend Danny Welbeck, because I think it was a dive, but with the contention that ‘it was the moment that decided the whole tie’, which is frankly an absurd thing to say. Over the two legs Arsenal scored five times, Milan just once, and while I do understand that it happened at a key moment in the game, to suggest it has embarrassed English football is hyperbole of the highest order. Was it as embarrassing as one of the richest clubs in the world crashing out of the Champions League playing the most atrocious brand of safety-first football you’ll ever see? Was it, perhaps, as embarrassing as the chief executive of the FA conflating the Star of David with the Nazi swastika or the ISIS badge? Or maybe as embarrassing as the FA Chairman signing a ‘memorandum of understanding’ with Qatar, where homosexuality remains illegal and flies in the face of the some of the genuinely good work that has been done in that regard in England (like the Rainbow Laces campaign)? Give me a break. Even the one man who has every right to be outraged if he wants, Milan manager Gennaro Gattuso, wasn’t as shrill and hysterical as elements of the English press, saying:

He is a striker. He has to do what he does, but we can’t use that as the entire influence of English football. Even when I was a player, I always tried to get away with something.

Game, set and match really. Also, the laser-focus on Welbeck for one dive in his career that I can think of is remarkable when there are players at other clubs who have more dives this season than Greg Louganis could manage if he appeared in a hundred Olympics. I’m happy to call it a dive, I don’t like it when our players do it, but what do people want beyond that? Be critical of Welbeck if you want – making sure of course that the same values apply to every player who dives, whether he’s English or foreign – but the idea that he has somehow brought shame to English football is nonsensical. He did what countless players have done before and will do in the future without anywhere near as much fuss. I mean, Milan had a player booked for diving last night. Where’s the outrage? Did it have an impact on the game? Yes. Did it decide the entire tie? My hole did it. Arsenal scored five goals. FIVE.

Milan one. In fact, if you want to look back at the game the biggest problem the visitors had last night wasn’t Welbeck, but their own inefficiency in front of goal. They had good chances, as early as the first minute, and had they not been as wasteful they could have really changed the trajectory of the game. That was something that was in their hands, under their own control, and they fluffed their lines repeatedly. They embarrassed Italian football with their wastefulness. In seriousness though, over the course of those two games the best team has gone through. We got a bit of good fortune with Granit Xhaka’s second, the keeper and his sweaty palms won’t want to watch a reply, and throughout we played some nice stuff without always being able to find the final ball. Welbeck put the icing on the cake late on when he pounced on the rebound after Ramsey’s header from a Wilshere cross was saved, nodding home from close range for his second of the night. And I bet you he went home last night feeling good about himself because he’s got back on the scoresheet, and so he should. It’s important for us and our Europa League campaign that he got back on track a bit so last night was pleasing in that regard. It means we’re in the draw which takes place today, and our potential opponents are: Atletico Madrid, Marseille, Lazio, Sporting Lisbon, RB Leipzig, Red Bull Salzburg, and CSKA Moscow. Varying degrees of difficulty there, but we’re now at the point of this tournament when a place in the final starts to appear in the distance. I think we can take plenty of encouragement from what we’ve done over the two games against Milan, and whoever we get is going to be tough anyway, so bring it on. If we go the distance we’ll have to beat some good teams, but then that’s what happens when you make progress in a tournament like this and it’s exciting. It’s also good to have something that keeps the season alive, keeps the players focused and gives fans something to look forward to. I think we need that. We’ll have the draw for you over on Arseblog News as soon as it happens, and because of the late football last night James and I will have an extra Arsecast Extra for you this morning. If you have any questions or topics for discussion, please send to both of us on Twitter @gunnerblog and @arseblog with the hashtag #arsecastextra, and you can dive right into that before lunchtime. Until then, have a good one, and I hope the shame that Arsenal have brought to English football isn’t too much for you to bear this morning.