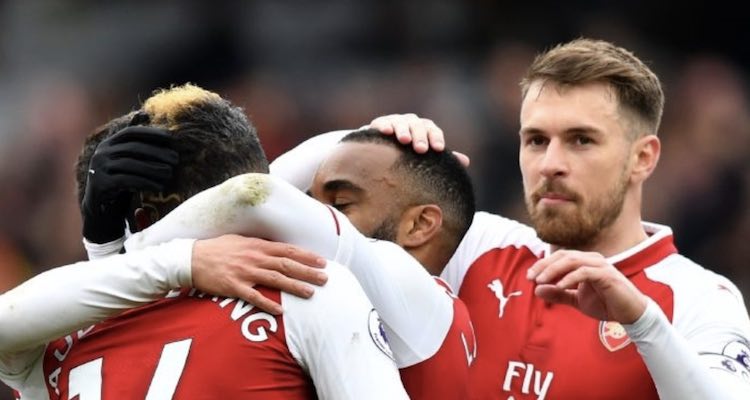 For around 70 minutes Arsenal v Stoke yesterday was something to be endured rather than enjoyed. We had been poor most of the game – although better in the second half than in the abject first – and there was a growing fear that they might just nick something and leave us with little time to react.

Then, in the 69th minute, Stoke got a corner. Xherdan Shaqiri took it, curled it over everyone and saw it clatter back off the post. Arsenal got it clear, and from there it was like we woke up. Almost immediately Pierre-Emerick Aubameyang found himself clean through on goal but Jack Butland stood up to make a save.

Calum Chambers had a chance from a corner, but he couldn’t adjust his feet quickly enough, and there looked to be a bit more purpose to the way we were playing. So, when Mesut Ozil looked to have been fouled in the box and the referee pointed to the spot, it felt like we’d had just reward for putting on some pressure. Replays show that it was a generous decision, Bruno Martins Indi got the ball and Ozil kicked him as much as anything else, but I can’t explain to you how little I care.

Sometimes they go for you, sometimes they don’t. Sometimes the opposition get awarded a soft penalty (which is, of course, evidence of a great anti-Arsenal refereeing conspiracy), and sometimes you get them. Aubameyang, who had missed from the spot against Man City, made no mistake this time, shooting low and hard to the keeper’s left to make it 1-0.

Arsenal were emboldened. Butland had to make saves from Ozil and substitute Henrikh Mkhitaryan, and from a corner Aubameyang got his second when the ball skidded into his path and he finished unerringly into the bottom corner. That was always going to be that in terms of the result, it sparked some enjoyable songs from the crowd about Stoke’s potential relegation, and you could see they’d lost their heads.

The foul on Lacazette for the second penalty was borne out of frustration, I’m sure, and while I was expecting the man who had scored twice already to knock it in for his hat-trick, he gave it to the French international who marked his return from surgery and injury with a goal to put him in double figures for the season.

Explaining why he didn’t take it himself, Aubameyang said:

Aubameyang on why didn’t take the 2nd penalty.

“I know that Laca is back and I scored twice, I think it’s good for his confidence and that’s why.” pic.twitter.com/ia67Vsf3tA

I haven’t really paid too much attention to reaction, but from a cursory glance at Twitter I can see that some of the pundits have been critical about this, as if it means Aubameyang is not ruthless enough, or focused fully on scoring goals. To which I would say, that’s a strange accusation to make about a striker who scored 141 goals in 212 games for Borussia Dortmund and one who has 5 goals from 6 Premier League games for us. And by strange I mean utterly stupid.

I thought it was a great gesture, one that will benefit both Lacazette and the team, and shows this is a player who thinks more broadly than just how many goals he has at the end of the season. This is a team game, after all, and while nobody would have criticised him if he’d taken it himself, his decision to give it to his teammate is one to be applauded, not derided.

I guess when you win 3-0, somebody has to make a bit of a drama out of something, that’s just the kind of world we live in these days. For all the things you could be critical of having watched that game yesterday, that was definitely not one of them.

Generally, I thought we were poor, the first half in particular was worryingly bad and the way we conceded possession so frequently was hard to understand. I think a better team than Stoke might have made more of our carelessness, so we can be thankful that they’re as terrible as they are this season.

As I said yesterday, the enjoyment from this game would always come from beating them and contributing to their struggles. Taking the three points, and putting a dent in their goal difference, made those final 15-20 minutes quite enjoyable overall, but there wasn’t much else to like about what we did, how we did it, or the kind of football we tried to play.Maybe we can put it down to post-Interlull rustiness, it is something we’ve seen before and it was referenced by Aaron Ramsey afterwards, but it felt very much like more of the same stuff we’ve seen often this season.

Still, on the plus side we got the win, got some minutes under our belt before Thursday, hopefully got ourselves a bit sharper, Lacazette is back and scoring again – he made a real impact when he came on for Welbeck, and we made Stoke very, very unhappy which really trumps everything else this morning.

When you hear them sing songs about Aaron Ramsey walking with a limp, you can’t help but hope they end up going down and staying down. I mean, I hoped that anyway, but that kind of stuff just reinforces it. If this win helps that happen, then it’s a small bright spot in what has been a pretty dark season in the Premier League.

It’s impossible not to mention the crowd, or lack of it, and I don’t really buy into Arsene Wenger’s explanation that Easter was a contributory factor to people staying away (although he did mention how little there is to play for in the league now). It is a consequence of our season overall, and the fact that beyond sticking it to Stoke this was a game which had little going for it.

Thursday, however, is a different proposition. It’s a European quarter-final in a competition which has real meaning, so fingers crossed there’s a better turnout because despite the players saying the strange atmosphere didn’t make any difference, it can’t be easy playing in that kind of environment. Anyway, we’ve set ourselves up reasonably well for the CSKA encounter, and the focus can now turn towards that for the rest of the week.

James and I will be here this morning to deliver a bank holiday Arsecast Extra for you. If you have any questions or topics for discussion, send to @gunnerblog and @arseblog on Twitter with the hashtag #arsecastextra – and that’ll be ready before lunchtime.