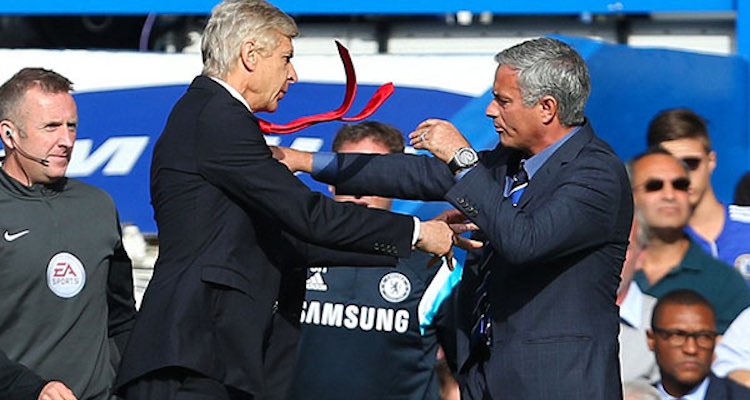 Morning all. It’s unusual that a game between Manchester United and Arsenal pales into insignificance, but that’s kinda where we are this morning because it falls between the two legs of the Europa League semi-final. It’s not completely without importance though. It’s Arsene Wenger’s last ever trip to Old Trafford as Arsenal manager. It’s a stadium where he’s had some highs (“Wiltoooooooooorrrrrd”) – and some lows, but I hate two bring one of them in particular up again. I’m sure it will be a bitter-sweet moment for him, especially when he thinks back at how the incredible rivalry between us and them in the first ten years of his tenure was basically Premier League box office. If you lived through that, you’ll remember very well just how intense those games were. Two absolutely brilliant teams who were incredibly well matched, both in terms of their technical and physical quality, and who embraced this competitive conflict like it was something they’d been waiting for their entire lives. The football was superb, the desire to win on both sides at maximum levels, and that created something really, really special. Not just because it was two teams who wanted to win at all costs, you can have that at any level of football, but the quality of the players and the undercurrent of hatred and violence resonated with fans on both sides. The players didn’t like each other, the managers didn’t like each other, the fans didn’t like each other, and everybody else loved those elements because they sparked some incredible confrontations – with the ball and without, on the pitch and off it. These were pulsating encounters, and while I firmly believe Arsenal should have won more in the first part of Arsene’s reign, it was still absolutely brilliant on almost every level you can think of. It’s not the same now, it can’t be because what made it special was how organic it was. Wenger came in and made Arsenal a force to reckoned with at a time when United looked like they were going to dominate the league unopposed. The suspicion over foreigners in English football was still quite high, particularly in terms of managers, and that he got under the skin of Ferguson so quickly was a testament to the threat he and Arsenal posed. 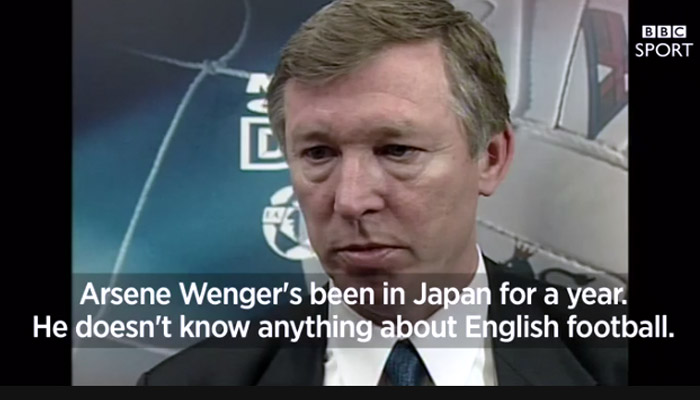 As much as our title wins, doubles, FA Cups, and unbeaten season will be part of the manager’s legacy, so too will be the battles against that United side. Two great teams, neither giving an inch, and winning the title there in 2002 – on a night when they were determined not to let us do that, through fair means or foul – is, to me, one of the greatest performances in this club’s history. Now, Ferguson is gone, United have been wishy-washy for a few years under Moyes and van Gaal, and although it’s Jose Mourinho there at the moment, Wenger is looking for a peaceful final visit to Manchester. He says:

You should leave me and give me a little peace for my final weeks and not try to push me into final confrontations.

The relationship with Mourinho has, down the years, been difficult to say the least, and let’s not allow the sentimentality of this occasion make it seem like it was both sides at war. It was because the Portuguese was an absolute prick, there’s no other way around this. He said things he should not have said down the years, behaved in ways he shouldn’t have too, and whatever else you think of Wenger his intolerance for rank cuntitude is to his eternal credit. A great example of this was a home game against Man City (perhaps) but whoever it was Mark Hughes was manager. He spent the entire game berating the Arsenal manager from the technical area, calling him names, making gestures, so at the final whistle Wenger walked off without shaking hands. Cue Hughes bleating to the press about how disrespectful that was, but Arsene was right in my opinion. If you want to call someone names, fine, but don’t cry when they rightly consider you a dickhead and don’t want to shake your hand. Things are calmer now between Wenger and Mourino:

It has been, like with Ferguson, very tense like always when you fight together, but overall it is respectful.

But I thought thought it very interesting that the manager had a little pop at sections of the press for helping to spark confrontation between the two down the years:

I must say as well it is very difficult when you play against fellow managers, they get reported things that you have not necessarily said. In press conferences, they say ‘Wenger said that’ even if it is taken out of context and you then get people who are upset or vice versa.

I have lost count how many times that’s happened. In time Wenger grew wise to it, but there were questions in press conferences that were designed to create conflict. He’s asked about something, he answers, that answer is taken out of context and presented to Mourinho at his press conference who, unable to help himself because he is a monstrous testicle, bites back. Which isn’t to excuse Mourinho or anything, but there’s been a lowest common denominator element to their relationship down the years, and amazingly he’s not it: it’s some of the hacks who take that award. And when you consider some of the stuff the United manager has said and done down the years, that puts some of those people well and truly in the gutter. Anyway, we’ll see what happens at Old Trafford tomorrow. Will it be peaceful and full of love? Or will both these managerial leopards find it to difficult to change their spots and have at it? If it comes down to it, my money’s on Arsene, the sinewy, long limbs would be no match for Mourinho – and the last thing you want to do is fight a guy who’s got nothing to lose. Metaphorically speaking, of course