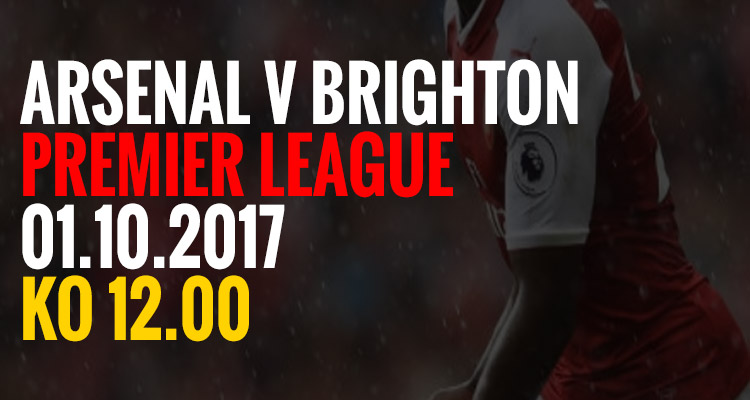 It’s our third game in 6 days today, and it’s a very early kick-0ff for a Sunday. The visitors are newly promoted Brighton and Hove Albion, and if you want to find out a bit more about them, check out the last 20 minutes of this week’s Arsecast. Having rested so many players for the midweek win in the Europa League, it’s likely to be quite a different team from the one that beat BATE Borisov, however there are some injury worries for Arsene Wenger. Mesut Ozil is out with a knee problem that’s kept him out of international duty, while worryingly Laurent Koscielny is a doubt as his ongoing Achilles problem has flared up. If he misses out, I’d assume Rob Holding will come into the back three alongside Shkodran Mustafi and Nacho Monreal. What will be interesting is to see who he plays in the Ozil role. Aaron Ramsey was shifted forward for the game against West Brom, giving us a central midfield duo of Granit Xhaka and Mohamed Elneny. It worked quite well, but the Egyptian did the full 90 in the last three games, so there may be issues of fatigue there. Alex Iwobi is an option if he passes a fitness test, as is Theo Walcott fresh off his two goal haul in Belarus. Without taking anything for granted, there should certainly enough quality in the squad to cope with a home game against Brighton. Having endured a poor start the season, we’re now unbeaten in six games, and the manager thinks we’re heading in the right direction:

Our recent results make us a bit more confident but as well we want to keep a level of urgency that allows you to perform at your best. If you look at the performances I believe that what’s most interesting is that we looked like we are consistent now and the results are always the consequence of the performances.

As we head into an Interlull after this game, there’s just that little bit extra riding on today’s result. The last Interlull was preceded by that visit to Anfield, a game many of us would like to forget but one which remains indelibly etched onto our brains (yes, I’ve tried wine and beer). The last thing we need is two weeks of introspection and anger because we couldn’t do what we should do, and that’s take three points today. A win would take us to 13 points, level with Chelsea, and 6 behind the two Manchester clubs who are ominously out in front with 19. I watched some of both their games yesterday, and while United have been fairly ruthless in swatting away the mid-table chaff, City’s performance at Stamford Bridge was worryingly good. It’s why games like today are so vital for us. I think we need to look at it first as one from which we take the points, but also one that could improve our goal difference if we play as well as we can. I don’t think there are any easy games in the Premier League, but you can make some of them look easy if you’re efficient and organised, and hopefully we’ll be that today. —

Just a quick update for those of you who use the arses – the bespoke comments system we have on the site – and the live blog. Unfortunately we’re having some real problems getting things back up and running again. We had hoped to have it back for today, but not only have we hit a brick wall, the brick wall has hit us back. Tom and I will be looking at various options, and I’ll be able to give you a more in-depth update shortly. I’m also aware that people paid their subscriptions for live blog chat, so if anybody wants a refund we’ll sort that out without question. Just drop me an email to thearseblog at arseblog dot com with your live blog username and email, and we’ll get that sorted for you. Once again, really sorry about this, but as much as technology makes our lives easier, it can sometimes complicate them too. Like I said though, we’ll have a fuller update for you, hopefully early in the week. As ever though, we’ll have a match report, stats, players ratings and the rest over on Arseblog News after the game. Until then.   The post Gunners have to ensure Brighton don’t rock + live blog/arses update appeared first on Arseblog ... an Arsenal blog.