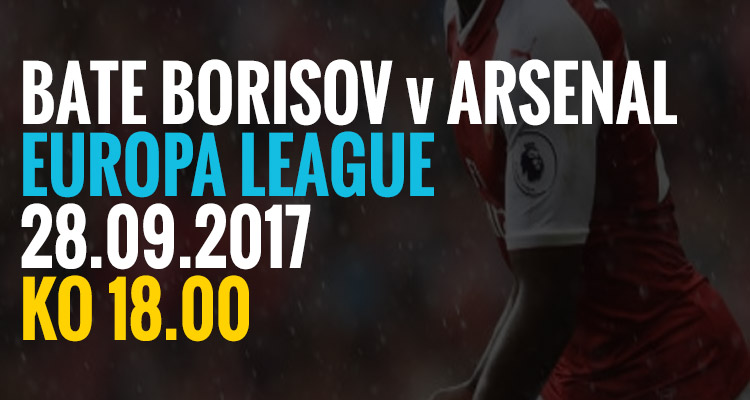 We get the full Europa League experience tonight: a 3,000 mile trip to play a team that are hardly one of Europe’s leading lights with a 6pm kick-off (in the UK at least). Arsenal face BATE Borisov for the first time in our history, and Arsene Wenger has brought a relatively experienced squad but with a real smattering of youth. There are three or four players who have never played at senior level as the manager keeps Sunday’s early kick-off in mind, including a couple of central midfielders, a ‘number 10’, and an apparently versatile defender. There are some, like Reiss Nelson and Ainsley Maitland-Niles who have been around the first team squad for a while, and both could start this evening. Wenger spoke very highly of Maitland-Niles in particular, saying that his future as a defensive midfielder is very bright once he can sort out some issues of concentration. The 19 year old will likely be asked to play as a wing-back tonight though. With the experienced players in the squad, we could see a team like this: Ospina, Mustafi, Mertesacker, Holding, Maitland-Niles, Elneny, Wilshere, Dasilva, Nelson, Walcott, Giroud. The manager says:

I said on Monday night after the game that I would play an experienced team with a young bench. We have a very tight schedule and it is an important game, and that’s why there is only one or two young players who will start the game.

As for tonight’s opposition, who sit third in the league in Belarus ahead of the likes of Torpedo BelAZ, Slutsk and Neman Grodno, I don’t know a lot about them, but Wenger says they’re a strong outfit that we will have to take seriously:

We watched them yesterday. They are a team with good quality, technically strong, so we will need a good performance to have a chance.

They’d certainly enjoy the prospect of taking a big scalp at home. Even if it’s not the strongest team we’d ever put out it’d be a great thing to beat a side like Arsenal. There ought to be enough experience to do the job tonight, but it’s very hard to predict what might happen and how we’re going to play. Coming in a tricky week this could be a potential banana skin but fingers crossed we can get the win, because the quicker we get the points on the board to qualify from the group, the less impact these games will have domestically as there’s even more scope to rotate and play youth. Live blog update: At the moment it doesn’t look like we’ll have the live blog back up and running for today, sorry about that. It’s a bit complicated but hopefully we can get up and running again for Sunday’s Premier League game against Brighton. We will, as ever, have a report and all the post-match stuff over on Arseblog News. — Meanwhile, back home, comes news that Sky Sports are showing their true contempt for fans by scheduling Arsenal v Liverpool for Christmas Eve. They actually requested a 4pm kick off (!), which was refused by police – probably because they couldn’t get the staff – and have since revised that and are currently looking for a 12 noon start. Discussions remain ongoing apparently, and Arsenal have already checked with their own staff to see if they have the numbers to do it. Aside from permanent employees, Arsenal have hundreds and hundreds of part-time staff who work for every home game, so it’s about being able to provide all the required services of a match-day. However, once more it’s an example of television not considering the fans, this time though taken to another level. Without wanting to be all sentimental, and bearing in mind there are many who don’t celebrate Christmas at all, it is a day when many focus on family, their kids, their preparations for the next day (LAST MINUTE HALF-DRUNK SHOPPING!), and all the rest. Then think about what it means for the travelling supporters, who will have all those things as part of their lives, but are then asked to spend most of the day making their way from Liverpool to London and back to Liverpool again – especially with the curtailed travel services on Christmas Eve. Then, let’s look at what we’re being asked to do from a sporting perspective. Arsenal are scheduled to play four games between December 23rd – the current date for the Liverpool game – and January 1st when we host Chelsea. As it stands, this is what we’re looking at: Saturday December 23rd – Liverpool (H) Tuesday December 26th – Crystal Palace (A) Saturday December 30th – West Brom (A) Monday January 1st – Chelsea (H) Four games in 9 days is difficult enough, but to rob us of one more day of ‘rest’ during this period is absurd. There’s already a very good case to be made for playing at least one game fewer at this time of the year, and when more and more evidence tells you this kind of schedule is bad for players, bad for the spectacle, and that a winter break is actually the direction we should be heading in, to try and squeeze these fixtures into even fewer days is something that both fans and the club needs to resist. We all know that television calls the shots, they pay so much money there’s now an expectation that they can do what they want when they want, but there has to be a line. There has to be. Arsenal have a responsibility to do right by their players, right by the club from a sporting point of view, and right by the fans (even if we all know we are the easiest group to ignore in all this). At a time when empty seats are a very real issue for this club right now, to ask people to accept this kind of schedule would be a mistake. People are already choosing other things over Arsenal, and you can be quite sure that many more will choose family first on Christmas Eve. It’s one of those situations that demands solidarity between fans, both Arsenal and Liverpool, who can see very well they way they’re thought of by the fact this idea is even being proposed. It’s not good for Arsenal or Liverpool from a sporting point of view, and it’s terrible for fans. There’s football almost every day of the week now. Weekend games, Friday night football, Monday night football, Premier League games take place on Tuesdays and Wednesdays, there’s European football midweek, can’t there just be a couple of days that are sacrosanct? Particularly at a time of the season when there’s a glut of football for us to enjoy? Let’s see what happens, but I suspect this might be one that pushes people too far, and they’d be wise to listen to, and show some respect for, fans on this one. — Right, that’s your lot. Some extra reading for you this morning from Tim Stillman as he looks at the Arsenal Trident. Have a good one.   The post Arsenal look to BATE Borisov : Sky’s Christmas Eve plans should be resisted appeared first on Arseblog ... an Arsenal blog.